Koyasan is one of the most sacred mountains in Japan, being where Shingon Buddhism was founded and where the founder of Shingon Buddhism, Kobo Daishi, is buried. Or, as followers believe, the place where he slumbers and thus, it is a place where Shingon Buddhists in Japan aim to go on a pilgrimage to. Regardless of your beliefs, Koyasan is definitely one of those places that should not be missed, especially if you are spending a good amount of time in Japan. It is not a place that is full of attractions, but if you are a fan of Japan’s feudal history, you will find mausoleums of some of the most famous personages in Japanese history in Koyasan.

The main attraction of Koyasan is Okunoin, the site of Kobo Daishi’s mausoleum and the site of over 200,000 tombstones. Many call this a cemetery, but in actual fact, no bodies are buried there. You will however find grave markers belonging to famous feudal Japan era figures like Oda Nobunaga, Toyotomi, Hideyoshi, Takeda Shingen,  Uesugi Kenshin, etc. I’m not a history buff (didn’t do too well in my Japanese history class in university -_-), but one of my favourite Japanese novel series is based on the warring period, so I was extremely tickled seeing these grave markers. Okunoin is one of the most peaceful places I have been to, the moment you cross the First Bridge (Ichinohashi), calm settled over me and it’s pretty awe-inspiring to know that these grave markers have remained untouched for 500 years or more. Okunoin has a newer part to it as well and many corporations actually put up tombstones for the companies. One of the more interesting tombstones I saw was this, shaped like a rocket. 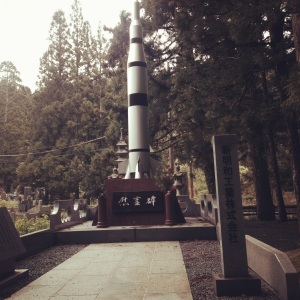 It is a long walk from the First Bridge to Kobo Daishi’s mausoleum and while it may be troublesome, it may be useful to pick up the free walking sticks that are available at the Koyasan station. You just have to remember to put it back before leaving Koyasan. Some Japanese uncles were very interested in our sticks and wanted to know where we got them and I tried in haltingly bad Japanese to explain. Don’t know if they understood me though.

There are other places to visit, including Tokugawa Ieyasu’s mausoleum

, but the other highlight for me was the temple stay (shukubo). To provide accommodations for the many pilgrims that visit Koyasan, monks started sheltering them in their temples and today, it has become so popular with both locals and tourists alike that it is a must-do when you go to Koyasan. There is not much information available on the internet about the temples, but from the forums, it seems like Eko-in, Shojoshin-in and Fudo-in are some of the more popular ones. However, staying the night in Koyasan was a last minute decision and those places were fully booked. Lesson: Book early if you are staying the night in Koyasan. We did manage to get a room at Hoon-in, which I have no complaints over.

Temple stays are not cheap on Koyasan, starting from about US$100 per person per night, but it includes dinner and breakfast. As you may expect from a temple, meals are vegetarian (shojin ryori). Don’t worry if you are a dedicated meat eater though, the meals are so full of flavour, texture and visual delight that you will not mourn the lack of meat, at least for a day and a half. Surprisingly enough, they do serve alcohol with dinner, if you request for it. Our faces must have been so comical when the monk asked us if we wanted beer with our meal, we were literally speechless for a couple of seconds. It seems that whilst the monks do not partake, they have no issues with alcohol being consumed in temples.

We really did like our stay at Hoon-in, the rooms were clean and large, the heater kept us warm (yes, even as the weather is turning warm and it gets hot in the day time, nights and early mornings can be freezing cold in the temples), the futon were comfortable, the monks were friendly and helpful, the shared bathrooms/toilets were clean and the food was great. What else do you need really? They even managed to arrange the bath times so that we need not see strangers naked while showering, so that’s a win.

If I go back to Osaka again, I definitely will try to fit in a trip to Koyasan, and probably for more than 1 night. Yes, the town pretty much winds down after 4.30pm, buses are very infrequent around that time too and you end up having to walk everywhere, which is ok because it’s not a very big town. Wifi is hard to get, Hoon-in doesn’t have wifi and the mobile wifi router that we rented could not get any signal (we are up in a mountain after all), but it is good sometimes to get away from it all. While most people stay for 1 night, 1 traveler who stayed at Hoon-in with us stayed for 5 days.

It is not complicated to get to Koyasan from Osaka as there’s pretty much only 1 route to take and it is worthwhile getting the Koyasan World Heritage Ticket, if you already have the JR pass. The ride is long, but it is scenic, so take the time to clear your mind and enjoy the greenery on the way to Koyasan.

Next time you are in the Kansai area, do consider spending some time in Koyasan.