Someone interviewed on television said that this feels personal, and I agree, I feel like I’ve lost my grandfather, and he is like a father, a grandfather to all of us Singaporeans, albeit probably not a fuddly duddly one. This man had given his life, and that of his son’s, to give us all a wonderful country to live in. He may not have made the most popular choices in his time in government, but he made the choices that ensured our survival. That we survived being cut off on an island with no resources to a country that can hold its own with the rest of the giants. He was unapologetic and looking at the video clips of him in his younger days, he was a badass, 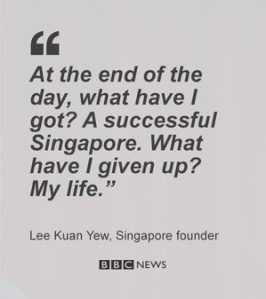 I’ve always looked up to him as our prime minister, as our leader, but as I grew up and read more about him, I truly began to understand what a visionary he was and how lucky we are that we had him at the helm all those years ago.Truly, without him, us Singaporeans would probably not have the luxuries that we take for granted and many countries around the world look forward to. Yes, there were other pioneer leaders who are as responsible for our success, but Mr Lee was the driver, the public face that made everyone believe that we could make it.

I did not choose to be born here, but I cannot imagine anywhere else in the world where I would want to call home, partly because of what Mr Lee has built here.

So, thank you Mr Lee. Thank you for giving so much of your half to taking Singapore to where we are right now. It is time for you to rest and be with your beloved wife and we’ll try not to rouse you from your grave.