I have to admit that my primary reason for going to Matsumoto was because it is where Mirage of Blaze is based. Secondary to that was to visit the Matsumoto Castle. We initially wanted to go to Himeiji Castle, because my friend had never been and despite having been there twice, I didn’t mind going there another time. Alas, it was under renovation and we figured we won’t see much of it and so we decided on Matsumoto Castle, which, together with Himeiji Castle, is one of the best known castles in Japan.

Unlike most castles in Japan, its exterior is black in colour, which earned it its other moniker of crow castle. It is not as big as Himeiji Castle, but its grandeur is equally apparent and just as beautiful. It is also Japan’s oldest original castle, going back to the Sengoku era about 400 years ago. If you are interested in ancient Japanese arsenal, there is an exhibition within the castle of a private collection of guns, armour and other weapons. Every castle has its own defence mechanism and in addition to oil holes and slits through which guns and arrows can be shot out of, Matsumoto castle has steep steps, really really steep steps that make it rather tough to climb, so best not to wear dresses or skirts.  Amidst all these defensive features of the castle, you’ll come to the Moon-Viewing Wing, which is a lovely indoor platform that overlooks the moat and presumably from there, you are able to view the moon. We were one of the last ones to leave the castle and it was a unexpected treat to see the staff slowly closing all the wooden windows of the castle by hand.

Part of the gun collection 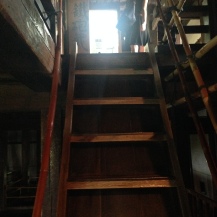 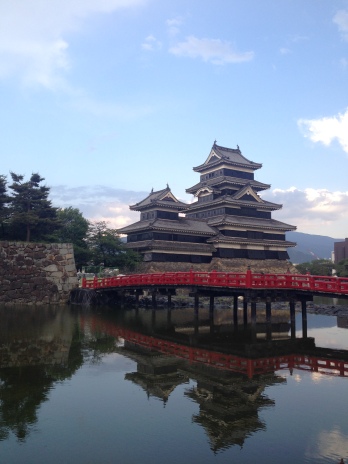 The castle is surrounded by a moat which is situated in a park and it is really lovely taking a stroll around the park in the late afternoon. While I do like visiting Himeiji Castle, it is almost always full of people, and in comparison, Matsumoto Castle feels really peaceful.

We then took a walk through the residential area of Matsumoto to look for the Kaichi School, which was one of the first schools set up in Japan in 1873. It was then turned into an education museum. To be honest, as a tourist spot, it really didn’t do much for me, but the w 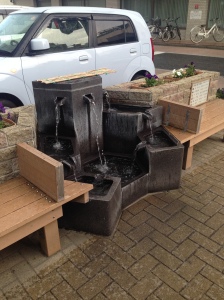 alk was nice. Along the streets of Matsumoto, we came across quite a few beautiful drinking fountains that not only decorate the place but is really convenient if you need a drink.

Next up on our agenda was Nawate-dori, an old-fashioned street by the river that has small shops selling all manners of things. Unfortunately, we were there in the afternoon and it was raining, so not a lot of shops were open. We did see a lot of frog-related items on sale there though, strangely enough. Upon doing a little research for this post, I found out that the frog is the street’s mascot, should have figured! 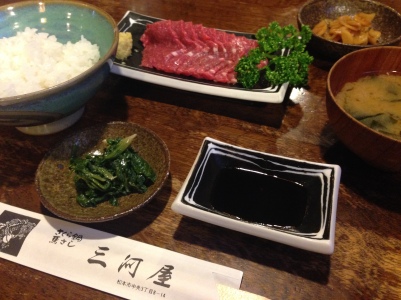 Besides Matsumoto Castle, the other thing I was excited about was basashi – horse meat sashimi. After watching the Mirage of Blaze anime countless times and hearing about basashi, I was really curious about this dish. The thought of eating raw horse meat was pretty scary considering that I don’t even eat raw beef and I had a whole internal debate about whether or not I should try it from the morning we set off for Matsumoto. I finally decided that I had to try it since I was there and basashi is what Matsumoto is also famous -for. So I frantically googled for a place that serves basashi while walking along Nawate-dori, not many places were recommended by the way. Finally found one that seems very reputable and set off to find it, but it wasn’t the easiest place to find. Thank goodness, with the help of friendly local tourists, google map and a lot of walking, we found Mikawaya. I was so nervous about eating it that I ordered a bottle of beer to boost my courage, lame I know. Basashi, it wasn’t bad at all. I was afraid of it having a very meaty smell and taste, but there was none of that, just a faint sweetness of meat as you chewed on it. It looked very civilised with thinly sliced pieces of basashi served with miso soup and some side dishes. That said, while I won’t say no to eating basashi again, I probably won’t seek it out again. Mikawaya is one of the premier places to try basashi, but it’s not the easiest place to find, so I say GPS is your best friend when looking for this restaurant. Also, the menu is a gorgeous piece of work with beautiful Japanese calligraphy, but the bad news is that it’s all in Japanese. There are 2 choices for horse meat here, either the basashi teishoku (pictured above) or the Sakura nabe, which is Japanese nabe but with horse meat. However, you can only order the Sakura nabe for 2 pax and above. It’s not too expensive, with the teishoku coming up to about US$20.

With our dinner done, unfortunately, we had to leave Matsumoto because it is quite a distance from Tokyo, a 2-3 hours train ride. While several websites say that there are hourly trains to Matsumoto from Tokyo, we found that it wasn’t really so, therefore, if you intend to do a daytrip to Matsumoto from Tokyo, leave really early. Matsumoto is a really lovely place to visit and especially if you have a JR pass, it’s not a bad idea to spend a day there.