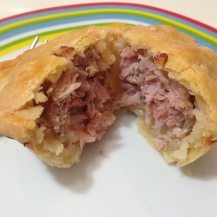 I’ve always been fascinated with meat pies. Not the modern versions of it with the mashed potato topping or even the ones with the rich gravy. What I want are the hearty meat-packed pies that I read about in stories of old England. I’ve searched for recipes before, I’ve even watched the Sorted video on Pork Pie, but I’ve always been put off by the lard in the pastry. I decided to bite the bullet and do it over the weekend (why I decided to do it on a weekend when I was getting new lighting and new furniture, I’ve no idea), but with a cheat; I was looking for store-bought shortcrust pastry. As fate would have it, I couldn’t find the frozen pastry and I saw lard, so I said to myself, “why the heck not?”.

I followed Gordon Ramsey’s Pork and Ham Pie but used different cuts of pork and seasoning. I wanted a good mix of lean and fatty meat so that the pie would not be too dry. Had a minor boo boo – thought the lard I bought at the supermarket would melt right down but after putting in the liquids to melt, realised that the recipe called for rendered pork lard, rather than the stuff that they cut off the pig. Thank goodness I could still render down the fats to give me enough lard for the recipe. The good bit about rendering your own fat? The crunchy pieces of fried pork lard after. Delish! Definitely be hitting the gym this week.

To clarify, I did not put in the gelatin stock (I tried, but I just couldn’t get the stock into the hole!), but it still tastes good anyhow. Instead of using a muffin tin, you could do what the Sorted boys did, which was to mould the pie round a glass and freezing it. That may have been a better idea as my pies did stick to the tin despite me oiling it to bits and removing them were a bitch. The ingredients were enough to make 12 mini-pork pies instead of 1 big pie. I had no issues with a soggy bottom, everything was nice and crisp, even after a couple of hours.

Definitely a bit of a hassle, but well-worth it, I love biting through the crispy crust to the flavourful meat and the fact that I made this from scratch? Makes me feel good. Hope it makes you feel as good if you try it.