A little pricey, but worth every penny.

That was my mantra for our short break in Bintan over the weekend. A couple of us decided to spend a couple of days in the sun on the beach and we decided on Bintan because it’s near enough to Singapore and we didn’t have to get on a plane. We booked a 3-bedroom villa at Indra Maya Pool Villa, which is under the Nirwana Gardens group. It really wasn’t too expensive and shared among 7 of us, we ended up paying slightly under $150 per night per person for a villa with a sea view. We got there and we were told that they’d upgraded us to a sea front villa – score! I wasn’t expecting too much after reading some of the reviews on Tripadvisor, but the villa turned out to be really nice. Yes, it’s slightly dated, but there wasn’t anything to complain about and more importantly, the pool was lovely, the pool-side lounges were clean, and I wasn’t afraid of lying down on the furniture. 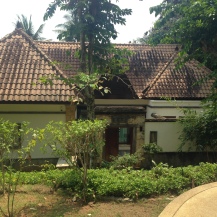 Entrance to our little private piece of heaven 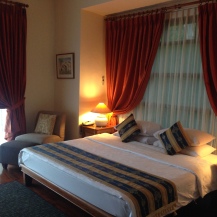 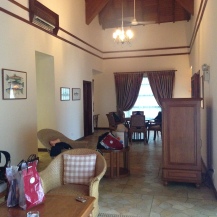 We also got a buggy thrown in, which was good, because walking to the reception would have been a bitch. I got a turn on the buggy and it was such fun (don’t have a driving license, but this is fuss free driving, though I did get a little stressed at the beginning thinking about how I held 5 lives in my hands!) 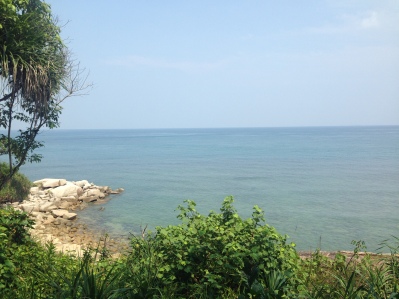 As with most people who vacation in Bintan, we headed out of the resort for a massage at D’ Bintan Salon Day Spa. Apparently, they have 2 outlets, one at Pasar Oleh Oleh and one near the hawker centre, which is about a 5-min drive away from Pasar Oleh Oleh. I would recommend going to the one we went to, if only because of the grocery stores opposite the spa. You can get snacks, water, and eggs at a very low cost and according to this blog, cheaper than the stores at Pasar Oleh Oleh. Getting there is easy, all you have to do is to call D’ Bintan to book a massage for more than S$50 and they’ll send a car for you. They’ll even drive you back to the resort or to Pasar Oleh Oleh, if that’s your preference. If you do not want to leave the resort, Nirwana Gardens has its inhouse spa, Anindya Spa, at Mayang Sari. It is pricier compared to D’ Bintan, but to be honest, I think I enjoyed the experience at Anindya Spa just that little bit more and we had a 20% discount because we were staying at Indra Maya, so that was a plus 🙂

After our massage, we decided to head to Helo Helo at Pasar Oleh Oleh for dinner and it wasn’t the best meal, nor the cheapest. For an average meal shared among 5 people, we paid almost a hundred bucks. They do have cheaper food like fried rice and such, but if you’re sharing among a group, I feel it’s not that worth it. Plus point was that they provided transport back to our resort, which was a scary experience in itself because I think the driver is a race car driver wannabe who was very interested in talking to one of our friends while driving very fast. For that kind of money, I’d say head over to the Kelong at Nirwana Gardens for seafood. Now, that was a satisfying meal and the fresh pineapple juice is to die for! Pour a little rum in and you have a nice tropical mixer ;p

We didn’t get to go to the Calypso Bar at the Kelong because we brought a ton of alcohol with us and we were all ready to party at our villa…right. I fell asleep at 9pm the first night and our little pool party the next night was a flop. People, pool parties at night are only a good idea if you have a heated pool. Shivering and swimming to keep warm does not a fun party make. As for alcohol, get liquors and wines at the DFS at Tanah Merah Ferry Terminal, but get beers at the ferry terminal in Bintan. Why? Not many choices for liquors and wines in Bintan and cheaper beer available in bulk in Bintan. If you like your Western snacks like Lays, Cheezels and corn chips, you’re better off bringing them over from Singapore, but if you like stuff like prawn crackers and prawn balls, those in Bintan are really nice.

The breakfast at the Spice Res 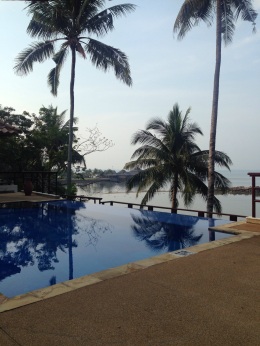 taurant in Mayang Sari is pretty decent, coffee’s not the best, but everything else is quite delicious. I love it when they have stations that do eggs, and they have that as well as a pancake station that turned out yummy, fluffy pancakes. I also liked this penne scortel thing; cream pasta topped with cheese and almonds. Other than that, it was a mixture of Indonesian and Western fare. Highlight of breakfast was actually the sight of a teenage boy wearing a pair of Angry Birds sleep pants totally unselfconsciously :p

I definitely would not hesitate going back to Indra Maya again for a short, or even a longer break because it’s just so nice and relaxing and waking up in the mornings with a view of the wide expanse of ocean is just rejuvenating.

To end off, this blog is one of the best resources on Bintan that I’ve found.